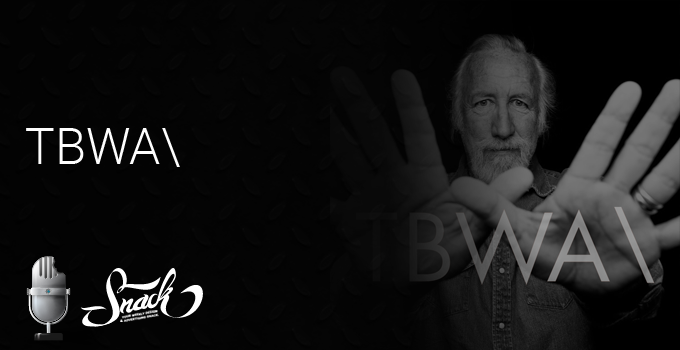 Another week, another Snack for our awesome community brought to you by Creatopy.

In today’s podcast we’ll talk about the famous agency TBWA and the awesome campaign that made them popular. “Think different”

We’ll also talk about what disruption is, how it works and why is this a good strategy. Today we also have a special guest to our podcast. I hope he’ll inspire you.
Enjoy.

“Here’s to the crazy ones. The misfits. The rebels. The troublemakers. The round pegs in the square holes.”

This is the opening statement of a successful ad from 1997. So successful that it started a digital and cultural revolution.

You probably figured out that i’m talking about Apple. However, i don’t want to focus on Apple too much, but instead i want to focus on the Think Different campaign and especially on its creator “TBWA”

So, before we dive into the Think Different campaign, let’s see who is TBWA.

TBWA or The Disruption Company, is an independent, privately-owned advertising agency with offices in over 16 cities worldwide.

The company is based in Europe and made a mark in the United States by promoting products, such as Absolut vodka and Evian water. With a reputation for creativity and emphasis on international scope, TBWA is poised for a greater role in the global advertising market.

Established in 1970, and acquired by Omnicom 20 years later, the agency expanded rapidly during the 90s to become a worthy partner to BBDO and DDB, agencies that we’ll talk about in future episodes.

Two key developments in the growth of TBWA were its merger with Los Angeles agency Chiat Day in 1995.

TBWA Chiat Day is responsible for some of the coolest and most iconic Apple ads. Apple is not their only corporate client. They also work for H&M, GoDaddy, Nissan and Absolut Vodka.

Now, there is one question that popped into my mind while doing the research for this episode.

TBWA strives to break the market conventions by defining a vision, a mindset and new ways to connect with the audience.

This is a three steps process.

Conventions and the process of breaking them by thinking outside of the box is the first step. They are looking at centern aspect to figure out what pattern the consumer is stuck in, what are the competitors doing differently and what kind of baggage in the brand’s history is keeping it down.

The second step is to define a vision. They look at the current cultural changes and what kind of outside influences could steer the brand’s direction.

And the final and most important step, the disruption. They come up with an idea so provocative, it will bring you a new perspective on your business itself that will put you ahead of your competition and destroy the conventions.

Now that we know how they operate, we can finally analyze their work and namely, the one great ad that was voted the best in 1984 by multiple advertising professionals, and the reason why Apple as well as TBWA is so famous today.

The Think Different campaign was an enormous success for Apple considering the company’s immediate bankruptcy they were facing.

According to Craig Tanimoto the intern that came with the Think Different idea, “Apple was in trouble, big time. They had only 90 days of money left,” said Craig.

“Steve was back at the helm, but the big question was, were they going to survive?”.

In the brain storm process of creating an advertising campaign for them, Craig had an “aha moment” when he doodled the Apple’s logo the Think Different slogan over some of the world’s most famous figures. Through this ad campaign Apple made a statement. They places their products next to people like Ghandi, Edison, Martin Luther King and Pablo Picasso.

Through this ad campaign Apple made a statement. They places their products next to people like Ghandi, Edison, Martin Luther King and Pablo Picasso.

The rest, as they say, is history. I want you to listen Steve Jobs’s view on advertising and this ad specifically.

The ad was a major turning point for the company. Steve Jobs and the Chiat TBWA agency view things the same and they believed in the same values at its core.

The moral of the story is this. Do you want to do something different or do you want to make a creative manifesto as well, even at a smaller scale? Then don’t just think outside the box, destroy the box and get rid of the conventions around your brand,  your product and lastly, your mindset.

That’s all for today. I hope this episode inspired you in the same way it inspired me.

Don’t forget to subscribe to our Itunes and Soundcloud channel.

‘Till next time,
Keep being awesome.