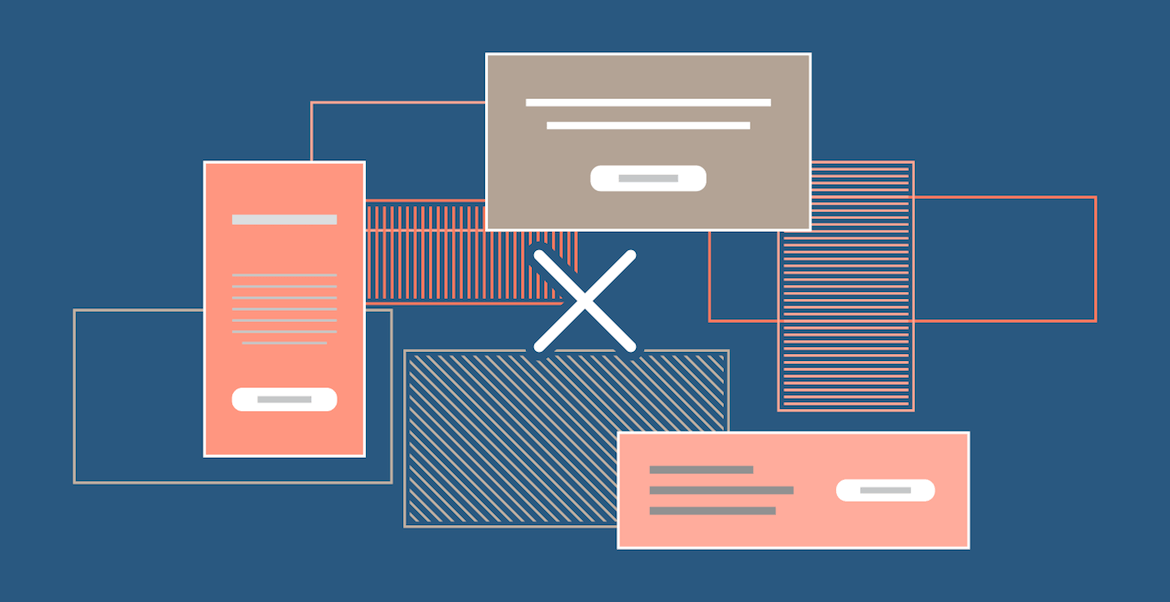 Close ad button is an essential element of a banner ad. I love ads, I always did and I appreciate a great one when I see it. Along with the evolution of advertising and technology, came the online ads. What does that mean?

That we are prone to see ads all over the places we navigate online. Be it a social network, a news site, a game or whatever other kind of sites we navigate on. But just as there are good and bad people, there are also good and bad ads. And most of the times, the bad ads are the ones that interrupt us from our activities, are poorly done and moreover, you can’t get rid of them.

Did you know that the average internet user sees over 1700 online ads per month? That means about 57 ads seen per day, in a few hours maybe less. 25-34-year olds get in contact with over 2000 banner ads per month, that being given by the fact that young people spend more time online than any other category. Also, around 95% of Google’s revenue comes from online advertising and in 2016 the digital ad spend topped $59.6 billion in 2015, a gain of 20.4 percent over 2014’s $49.5 billion, according to the Interactive Advertising Bureau’s annual report. It would be a shame if you invested in ads that get you nowhere, wouldn’t it?

I understand the need of wanting to showcase a product/service, of selling and promoting a business, but when you need your users’s privacy or time collide, there’s gonna be a war.

Didn’t it ever happen to you? Reading the news and BAM, an ad. Random music starting to play from nowhere! Which wouldn’t be a problem… if the ad had an exit button!  Or at least an exit button you could see or find. There were hundreds of times in which I had to restart my browser or  device, because I couldn’t get rid of an ad.

This article was written out of that frustration that we all have experienced with the ads. I’ll try to explain to you how the exit button works in online advertising and how important this is for the relationship between businesses and audiences/potential customers.

When ads are disruptive?

Many of us get pushed off balance by the slightest interruptions. Be it an unexpected phone call, a knock on the door or an ad.

For example, when you’re working so much that you don’t even have time to raise your head from your computer to rest your eyes or to disconnect for a minute. The rest of the times, disruptions, especially the online ones, affect users’ information processing, feelings of intrusiveness, and site’s credibility.

Edward and Lee (2002) defined intrusiveness as “a perception or psychological consequence that occurs when an audience’s cognitive processes are interrupted”. It’s safe to know though that ads are not considered disruptive unless they interfere with users’ information seeking task.

Does this disruption affect users opinion about a website?

A study made by Tina Benitez in 2002, says that 41% of the online users would not return to a website due to the annoying effects of disruptive ads, so you as a marketer should pay careful attention when deciding to target your users with ads inside your website.

Even though users generally dislike disruptive ads, apparently, relevant content disguised in ads is not seen as annoying as an irrelevant disruptive message. Kalyanaraman and Sundar (2003) found that the disruptive ads that targeted niche consumers were perceived much less annoying than other ads that had nothing to do with users’ goals or interests.

Is better targeting a solution? Debatable.

Why are close ad buttons useful?

No matter what kind of activity you perform while browsing the internet, an ad is almost always disruptive when appearing out of nowhere.

The “X” or other forms of leaving an ad, is there as a way of a quality control mechanism.

Not having an “X” button on your ads isn’t illegal (at least in most countries), but it is definitely unethical. If you don’t take your audience into consideration, most probably your ads are pointless. As I said above, users are more likely to tolerate a disruptive ad when it’s relevant to the action they were performing when interrupted. For example, if an user is reading an article about politics, he could easily accept an ad about the latest elections in Europe, but not one about diapers.

Marketing is a two-way relationship. The user comes on your website, you give him content to read, he reads it and engages with it. You give him something else he might be interested in through an ad, he might accept your proposal and click on it or if he’s not interested he should have the possibility of refusing it and go back to what he was doing when he was interrupted. If you don’t give him the chance of saying no, he might lose interest and respect for your website and never come back, because you just offered him a negative experience by trespassing his free will.

This is the reason Ad Blockers were invented because marketers don’t know how to respect people’s privacy and choices.

By June 2015, there were 198 million monthly active users for the major blocking ads browser extensions. If that doesn’t call for a better ad quality control, I don’t know what will.

Let’s say that probably people wouldn’t be so reserved about ads if there weren’t malicious ones. By the way, did you know that malicious ads have a name? The practice is called Malvertising and we love the name as much as we hate the action.

In the next chapter, I will show you some ways in which you can use the exit call to action. So, if you’re reading this, you have no excuse if you’re not adding one to your ad.

How to design the close ad button

The only types of ads that don’t require an exit button are the native ads. These ads, camouflaged, match the form and style of posts from that certain social network, so they aren’t intrusive.

All other types of ads require (or should require) an “X” button. However, even if we keep talking about the “X” button, the action of closing an ad may come in different forms.

It might look like a simple “X” in the upper right corner. The reason why the “X” is almost always positioned there, is that it’s a native behavior to look for it there. Most of us grew up using Windows, which has all exit buttons in the upper right side. MAC users might want to contradict me, but honestly, I don’t think this behavior will change soon. 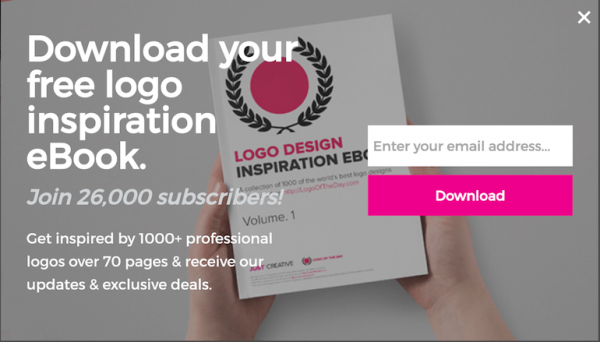 Or variations of that “X”

Another way of suggesting the action of closing an ad is represented by a secondary CTA button with text like in the following ads. 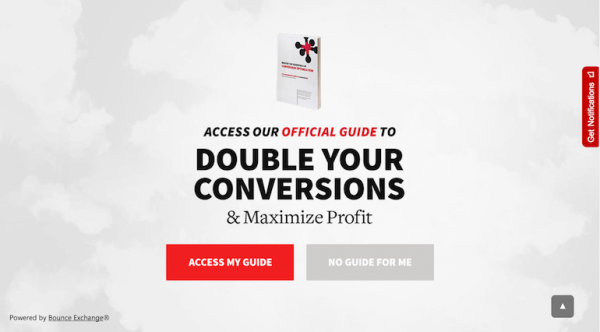 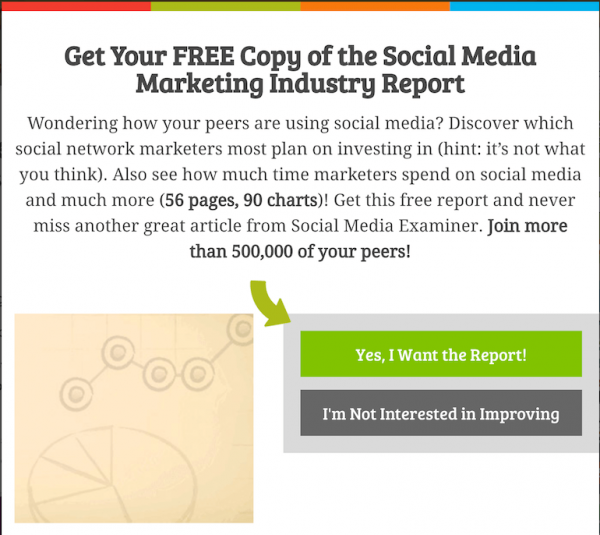 Sometimes, for example in YouTube Ads, you have the possibility of Skipping an Ad after a few seconds, and frankly that’s one useful feature!

Timing – When your ads start

This is the last and probably the most important thing you must take into consideration. Choose carefully the time in which you choose to burst your user’s concentration bubble. Let him read your content before asking him if he’s interested in reading some more. I know how important lead generators are for your brand and I know it’s a must do thing. But your user is also your friend, he’s the one bringing you traffic. Don’t make him leave your website before he planned to.

As I said in the introduction, I decided to write this article because I realized that there were so many ads without an exit option. And I felt compelled to either click the ad even though I wasn’t interested in it, or close the browser or even in some cases the device when the ad was malicious and kept sending me un-closeable notifications. In the end, it’s all about the respect you give and the respect you expect from the users getting on your website. What you give is what you get! 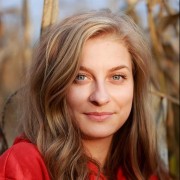 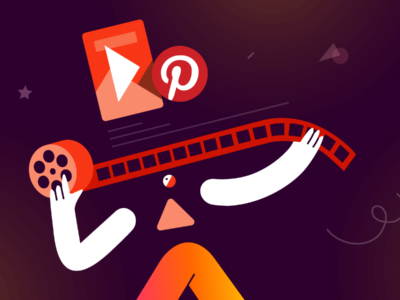 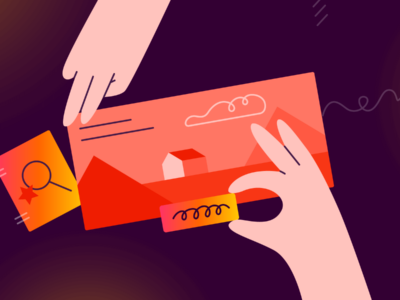 How to Make a Banner? The Ultimate Guide for 2022

Video Advertising: The Complete Guide for 2022