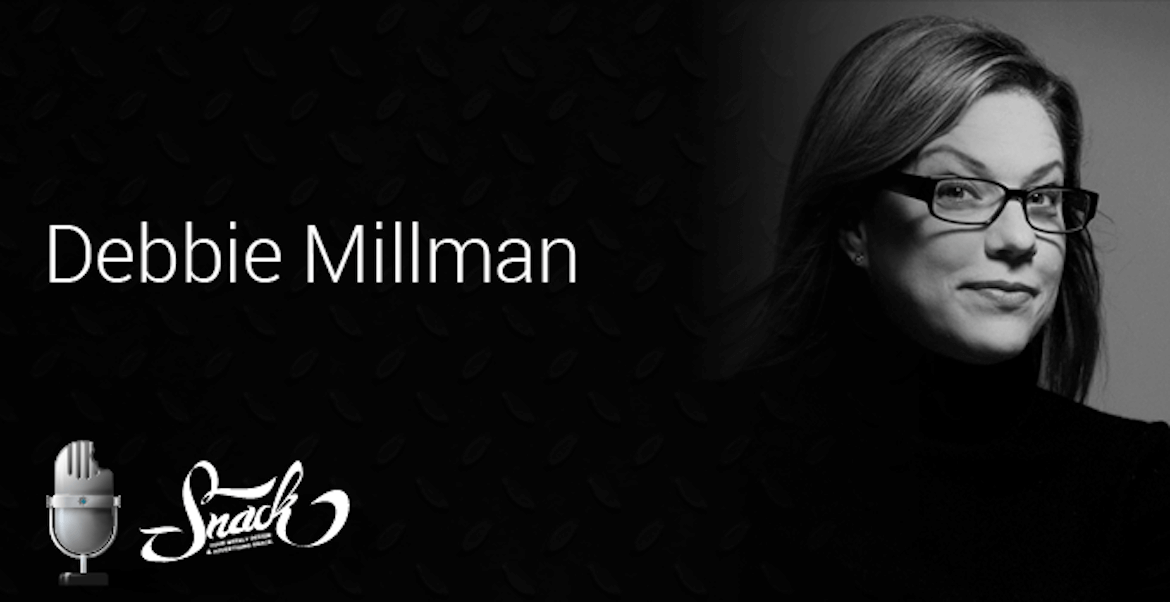 In the last few episodes of the Snack Podcast, we talked about the giants from the advertising industry (such as Leo Burnett, N. W. Ayer & Son, Wieden, and Kennedy) and the big players in the design industry (such as Massimo Vignelli, Paul Rand and Jonathan Ive).

Today, we will talk about a person who describes herself as a writer, educator, artist, brand consultant and the host of the radio show Design Matters.

You can read an interview or check out her opinion about working for free. But maybe you don’t have time to read all of this blog post, so we have a special present for you.

In this Snack Podcast Episode, we will talk about Debbie Millman. And while you will listen to it, make sure you have a big cup of coffee (or tea) next to you, a pen and a paper. Because you will definitely feel how the creativity wave will come rushing in your blood.

So, no further introduction just hit the play and check out our last Snack Podcast Episode.

Named “one of the most influential designers working today” by Graphic Design USA, Debbie Millman is also an author, educator, brand strategist and host of the podcast Design Matters.

Debbie started interviewing designers through her show in 2005.

She felt like this was the right thing to do, since most of the designers she interviewed were also her heroes. A lot of great designers were featured in her show. Massimo Vignelli, , Barbara Kruger and Milton Glaser are just 3 of the 250 design pioneers that passed through her studio’s doors.

As you probably know, we are huge fans of Massimo Vignelli. We talked about him before in a previous podcast and his work will always be a huge inspiration to us.

As I listened to the episode where Debbie interviewed Vignelli, I realized that there are so many things I didn’t know about him.
Here is a glimpse of that episode.

If you want to listen to the entire interview, check it out on their Soundcloud channel. The link is in the description.

Last year, she was interviewed by Creatopy where she told her life story, so I rounded up in this short bio.

She graduated college in 1983. Her first ten years of college were as she said “experiments in rejection and despair”. After she graduated, and even when she was still in college, she felt powerless and not confident enough to have the gut to do anything special.

Soon enough, though, she got a job for a cable magazine where she created paste-ups and layouts. After that, and another job which she labeled it as the worst job she fad in her whole career, Debbie started her own business. This was quite a bold move on her part but she wasn’t satisfied with her work. She felt like her work isn’t meaningful enough and she wasn’t really contributing to the New York’s design scene.

Life went south fast when she turned 30. She got divorced, quit her job and moved out of her apartment. Though, this didn’t stop her. After everything was failing, she decided that the only way to make a difference was by working with the best design firm in the country. Frankfurt Balkind.

Fast forward to today, Debbie is now the president of the design division at Sterling Brands where she worked with over 200 brands; including Pepsi, Colgate, Gillette, and Nestle. She is also Co-Founder and Chair of the first Masters in Branding Program at the School of Visual Arts in New York City. She is President Emeritus of AIGA, the biggest professional association for design in the world and a contributing editor at Print Magazine.

In an interview for the great disconnect, she was telling the host the story of her, falling in love with branding, and the “aha” moment she had regarding her career, and I think it’s quite interesting.

Her mother just moved to Florida and she felt a bit crowded so she wanted to downsize. She found some old boxes with Debbie’s drawings and other things she made when she was little but she never felt like throwing them so she gave them to her.

Debbie didn’t know that she was about to found a drawing that was going to change her life and her life goals.
She was 7 or 8 years old when she drew it. The drawing was depicting Manhattan altho she never went there.

This is how she described it “A man is hailing a cab; a young girl is walking with her mother, holding her hand; and a truck with a Lay’s Potato Chips logo on it is passing them by. When I saw this drawing, my “aha” moment occurred. I realized that deep down inside, I knew exactly where I wanted to live and what I wanted to do.”

In that moment, she realized how powerful branding really is. If a 8 years old was influenced so profoundly by a logo, you can grasp how early and how deeply a brand can be embedded in our lives.

If the only real signage in that New York street scene was the Lay’s Potato Chips logo, I was influenced by the power of branding even then.

Debbie is also the author of six books including “Hot to think like a graphic designer”, “The essential principles of graphic design” and our favorite, “Brand thinking and other Noble Pursuits”
This last book is the continuation of “How to think like a graphic designer” and it’s full of valuable insights. Even if you have no marketing background, you will find it entertaining, and if you are a marketer or a designer, expect to find some awesome interviews with some of the most influential people from this two industries.

The book is a must have for your design and branding library and we highly recommend you to check it out.

I want to end this episode with a Debbie Millman quote.

When you are a designer as skilled as she is and you have this mindset, it’s impossible not to achieve great things.

Debbie Millman is a huge inspiration for us and a raw model for every designer. Make sure you check out her podcast, books and basically everything it has her name on it.

That’s about it, guys. Make sure you subscribe to our Soundcloud channel and check out our blog for more design and advertising goodies.

Until next time, keep being awesome!